The Simplicity of Stuckey’s Marketing

The Simplicity of Stuckey’s Marketing:

Stuckey’s Convenience Stores, affectionately known as Stuckey’s is a family brand known to many. It has been the roadside convenience store on highways throughout the US for over 80 years. Stuckey’s has been a friend to the highway traveler.

On episode 66 of the Build Your Success podcast, Brian Brogen had Stephanie Stuckey, the CEO of Stuckey Convenience Stores as his guest. She took Brian through the challenges associated with reviving, rebranding, and restarting an 80-year-old start-up.

Taking on this project was very dear to Stephanie’s heart because Stuckey’s has been in her family for generations. Her grandfather started Stuckey’s an 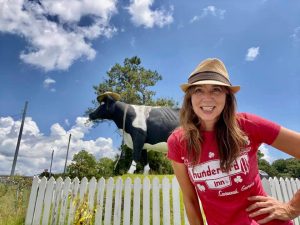 d how he ran his business was something to carry on. So many brands have been bought out by huge conglomerates and lost their originality and ‘family feel’. Wendy’s is an example. The founder, Dave Thomas was very personable and loved by many, but after Wendy’s was sold, everything changed. The brand lost its nostalgia. Stephanie wants to revive the nostalgic feeling in their customers.

But, how do you remain relevant in an ever-changing world? How do you draw on the nostalgia but at the same time modernize and remain relevant? Doing this has much to do with market trends and keeping up with technology.

Stephanie’s grandfather was a self-taught, hard-working observer. These were the traits that made Stuckey’s a household name. He laid out his stores to make sure that people were shopping and spending money on candy and souvenirs. He deliberately had limited seating in his stores and had a snack bar type of set-up to encourage people to walk around and buy more things. A strategic move that he made was to have a wall full of candy leading to the restrooms. Stephanie’s grandfather figured out something two-fold:

He was an observer of human nature. He would also plan where to put his next store simply by having some coffee and then driving until he felt like he needed to pull over to use the facilities. This was a simple but scientific method.

The simplicity of how Stephanie’s grandfather ran his business is what drives her today in her endeavors to revive the brand. She is taking things back to basics. He took a very hands-on and personal approach. Stephanie has started to do this by reaching out to people who love the brand on LinkedIn and other platforms to gather feedback. She believes it works just like any market research would because these are the people who have brand loyalty. Reach out to your network and let them help you make decisions.

To conclude this episode, Stephanie shared that if you ask people, they will tell you what they want. A comeback is good. The only way to make a good comeback is to have people part of the journey.

For more on this episode and others, tune in to the Build Your Success podcast.

To listen to Episode 66 – The Simplicity of Stuckey’s Marketing

Would you like to share your professional expertise or leadership insight with Build Your Success? Apply today and share with our community of leaders – Podcast Guest Application.

Brian Brogen, Build Yourself & Then Build Others!

Listen or read more about building your success at Buildcs.net or contact Brian at brianb@buildcs.net.