The True Grit of Mr. Vince

As we headed to lunch one day, I saw a familiar figure walking on the shoulder of State Road 37 in my hometown of Mulberry, FL. I commented to my father-in-law about how I keep seeing this man walking or his best attempt at walking and how much grit he had to drag the paralyzed side of his body on a very busy road most days of the week. My father-in-law responded, “Oh that is Mr. Vince, I think you and Jason went to school with his daughter, (Jason is my brother-in-law), I think he had a stroke”.

I was familiar with a stroke victim having one side of their body paralyzed as my Grandma Cochran was a stroke victim in this condition. She was amazing and wanted to do everything herself including getting her mail which I know took determination and grit, however, Mr. Vince took this to a whole new level.

I never formally met Mr. Vince but seeing him for years making his stride up and down State Road 37 I was always inspired by his grit and determination. I would see him at the Walmart North of Mulberry which is over a 4 mile walk from his house near the bluff South of town. This means he would have a round trip of over 8 miles using the good half of his body and laboring to bring the other side along for the journey.

In time someone gave Mr. Vince a highly visible vest, no doubt concerned for his safety as he encountered fast moving traffic and phosphate transport semi-trucks brushing by him with only inches to spare.

As his mobility decreased, we began to see him in a wheelchair, still wearing the high visible vest, he always traveled in reverse using his working leg to push the wheelchair backwards and a steering the chair by a combination of rolling and braking the wheel with his good hand. It was a sight, and I am sure those who did not know the story felt sorry for him. It did look pitiful on the surface, however, when you realized, he was stubbornly determined to remain active it was inspiring. 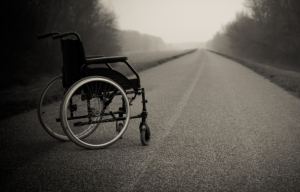 On one occasion I was traveling in the Northbound Lane of State Road 37 and in the distance at the bridge, I saw a wheelchair toppled over and the signature high visible vest. I stopped my truck, turned on the hazard lights and jumped out to help. I heard Mr. Vince screaming HELP! HELP ME! He was in a precarious position with one side of his face pressed against the asphalt of the Southbound Lane and he was facing South so he could not see the oncoming traffic which happened to be a phosphate transport truck.

I flagged my arms to the oncoming semi-truck, once he saw the situation, he too stopped, set his hazards blocking the Southbound Lane and jumped out to help me lift a very sweaty and thankful Mr. Vince back into his wheelchair. Do you think this event stopped Mr. Vince from his routine of traveling up and down the busy highway? No thankfully there he was again a few days later shoving the wheelchair with his leg and inspiring myself and I am sure others to quit making excuses and get determined.

It has been a few years since I have seen Mr. Vince, I have no idea if he is even alive at this point. However, his example of grit and determination will be with me as long as I live.

Lessons Learned from the True Grit of Mr. Vince

In spite of our circumstances, we all have something to give to ourselves and to the world. Don’t let the situation or limitation you have keep you from doing what you are able to do.

Mr. Vince’s routine journey became something I looked forward to. He kept going. This was the same road, same buildings and many of the same cars passing him by and he kept making the journey for his own physical activity and outside enjoyment.

Of the thousands of cars and trucks that passed Mr. Vince on this busy stretch of road. I know I could not be the only one who was inspired by his persistence. I would assume hundreds of others who travel this road frequently saw the True Grit of Mr. Vince.

Did you see Mr. Vince in Mulberry? Do you have someone in your community that is an example of Grit and Determination? I would love to hear your story. You can email me at brianb@buildcs.net

Brian Brogen, Build Yourself & Then Build Others!

Listen to a podcast on endurance: Having an Endurance Mindset

Find out how Brian can help develop your team through corporate workshops https://buildcs.net